Appalachian Word of the Week -- TAKE TO MY/YOUR/THE BED 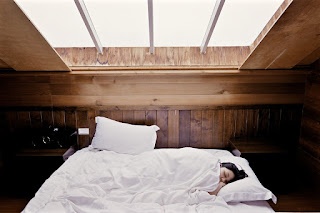 Several of my friends are feeling the negative effects of spring. Sneezing, drainage, sore throats, red eyes, upset tummies, and headaches. One friend made a comment the other day that brought back memories of my childhood in the mountains.

Did you ever get up in the morning and decide you'd rather stay home from school and watch TV, play outside, or read a book? That's when you decided to put on the "I'm sicker'n a dog and can't go to school today" act.

I never tried that tactic -- except maybe a time or two when I wasn't ready for a big project or a test and needed extra time.

My brother and sister tried to pull a fast one on Mom often. But Mom was too smart for them. She pointed her finger in the direction of their rooms and said, "If you're that sick, then TAKE TO YOUR BED." They tried to argue they would feel better on the couch, watching TV, but she wouldn't have it.

Now that I'm older, a lot older, I have days when I wish I could TAKE TO MY BED and forget about all the things I need to do. I know I have to really be sick to give in and TAKE TO MY BED, though.

Of course, being sick is not the only reason to TAKE TO YOUR BED. Sometimes we get so pooped from chores and tasks on our To Do List, that we need to TAKE TO THE BED to get a bit of rest.

There are other reasons, too. Not MY reasons. But maybe one of yours. On those days, you might not make it far enough to TAKE TO YOUR BED. You may TAKE TO THE SOFA. Or TAKE TO THE FLOOR.

Was TAKE TO YOUR BED used in your family? Do you still TAKE TO THE BED at certain times?

Tell me about it. I'd love to hear your stories.

Email ThisBlogThis!Share to TwitterShare to FacebookShare to Pinterest
Labels: Appalachia, Appalachian stories, growing up Appalachian, spring in Appalachia, take to your bed

Appalachian Word of the Week -- WORSH 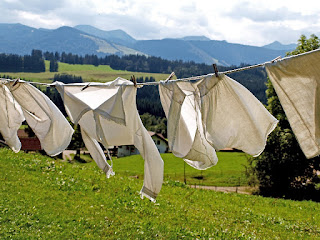 Today is WORSH day at my house.

Thankfully, it's not as difficult as it used to be during my childhood.

Do you remember WORSH Day?

Remember that old wringer WORSHER that sat on the back porch? It was a handy convenience, according to my mother. She remembered the day when they had to use a scrub board to clean the clothes at the river. I wasn't sure if I believed her hard-luck story back then. Now, I realize she described common practice in her day in Appalachia. Our WORSHER had wringers -- two round stick-like things -- on the back, above the WORSHER. You stuck the soppy wet clothes between the rollers, clamped them down, and it fed them through, squeezing most of the water out and back into the tub. It came out a bit flat and stiff.

Of course, my cousin discovered the hard way that those wringers would squeeze an arm and shoulder flat, too. Luckily, my aunt Joyce managed to stop the wringers before they pulled his entire body through. He ended up in a cast for quite a while after his smart little trick. I doubt he got anywhere near a WORSHIN' machine again.

After the WORSH had all been run through the wringers (Hmmm. Wonder if that's where they got that term), and mom stacked it in a laundry basket, she went out in the backyard to hang the WORSH on the line.

Our line sagged across the yard from one pole to another. In the middle of the line, we had a pole with a cut-out on top, that could be adjusted to lower the line or raise it. Since Mom was only five feet tall, she had to lower the line enough to reach and pin the WORSH to the line. Of course, the pole kept it high in the air when not in use. Otherwise, it could decapitate an unobservant runner. In the least, it would smart right good.

Did you have one of those little bags that hung on your clothesline with the clothespins inside?

When I was old enough to help hang the WORSH, my arms ached by the time I had it all pinned up. To keep the WORSH from dragging on the ground, we'd take that pole with the notch in it, lift up the line, and stab the pole into the ground. Certainly didn't want that clean WORSH to end up draggin' the ground--or being low enough for the dog to grab hold of it and run.

After the sunshine spent the day drying the WORSH as the breeze flapped the WORSH around on the line, it was time to unpin it and put it back in the basket. Oh, how heavenly to draw that sun-dried WORSH to your face and breathe it in. Nothing like it. Not even Snuggle dryer sheets.

WORSH day was not complete yet, though. Some laundry could be folded and put away, but a lot of it had to be ARNED. We didn't have steam ARNS in those days, so we had a different method for arnin' the wrinkles out of our WORSH.

Mom had a sprinkler head made of metal. It looked a lot like the end of a watering can, except it had cork around the neck of it and could be inserted into a bottle. We used a Coke bottle. That means it could have been Coke, RC Cola, Sprite, Squirt, or Nehi. We called everything Coke.

We filled the Coke bottle with water and stuck the sprinkler head into the top. Then we sprinkled the dried clothes, one piece at a time, folded and rolled them into a tight roll, and stuck them into a plastic bag with a zipper.

The next day, we ARNED the WORSH and hung it up in a closet or chifferobe.

Now, every WORSH day didn't fall on a warm, sunny day. For rainy, cold, or snowy days, we had a line set up in the house. It stretched from the front room to the kitchen. To keep it from sagging, a hook on the doorframe to each room held it high. Maneuvering through the house was a tad tricky on those days. We had to be careful carrying coal to the stove, or removing ashes from the firebox. We also had to keep the WORSH away from the stove. Mom constantly reminded us, "Don't mess up that WORSH or you'll be WORSHIN' it again yourself." Nobody wanted to re-worsh anything.

Do you remember WORSH day when you were little? Or littler? Are you as thankful for modern washers and dryers as I am? Guess I shouldn't complain anymore about WORSH day, should I?

Tell me your stories. I'd love to hear them.