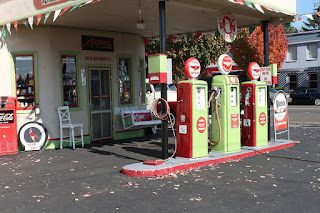 Today, most people refer to them as a gas station. Back in my day in Harlan County, we called them a service station or a FILLIN' STATION.

A FILLIN' STATION sold gas and very little else. If you were lucky, you could pick up a candy bar or gum on the oil-slimed counter. Most customers didn't come inside, though. They sat in their car as an attendant pumped your gas, checked your oil, and cleaned your windshield for you. Then you paid in cash.

Most FILLIN' STATIONS also had a mechanic on duty. My dad took care of all his mechanic needs by himself. But, if you were on the road and needed a tire, some oil, or a new fan belt, the FILLIN' STATION mechanic would come in handy. I know I used one a few times as I traveled back in the 70s. They also had their own tow truck in case you got stranded on the side of the road--or in a parking lot when I forgot to turn my lights off.

I heard tell there was another major product the FILLIN' STATION provided in Harlan County. Since we were dry--that means liquor was not legally available for sale--some FILLIN' STATIONS provided a secret stash of bootlegged whiskey or moonshine. At least that's what I heard.

These days, gas stations provide all kinds of goods. The station is more like a small market. I mentioned this last week when I talked about TRADIN'. They also have hot food available. Most have pizza, hot dogs or sausages, soup, and fried chicken. Beer and harder liquors are still outlawed for gas stations.

FILLIN' STATIONS have always attracted bad behavior for some reason. Aside from being held up, they're also the scene of disagreeable sorts who would rather duke it out than behave in a civil manner.

Just today I experienced an all-out catfight at one of our local gas stations.

As I innocently pumped my own gas (not like the FILLIN' STATION), a car screeched into the pumping area. A woman threw open her door and ran for the woman at the pump across from me.

Before I knew what was happening, the newcomer threw the pumper onto the ground and started wailing into her with both fists (woman to woman). Much language I can't repeat here ensued.

Those two grabbed each other by the hair extensions and dug into each other with their sculpted talons (nails). They rolled all over that parking lot, screeching like banshees.

The rest of us grabbed our phones and some called 911 while others started videoing. Sorry, I'm not one of the videographers.

Not a single man tried to help the recipient of the newcomer's anger. They stood there and taped it --  to show their friends, I guess.

Finally, the two women from inside the gas station came out and tried to separate them. When they mentioned the security cameras and that the cops had been called (the police station is right down the road), the attacker released her victim and hightailed it to her car. She flew out of that parking lot, leaving rubber to identify her path.

The two workers helped the victim off the ground as both parties released a few more streams of cuss words at each other, followed by a few threats.

At least the employees were still offering "service" from the FILLIN' STATION days. They even finished pumping the lady's gas for her.

Did you call it a FILLIN' STATION? Do you remember anything I've forgotten? What do you call them today?

I love hearing your stories.

Appalachian Word of the Week -- TRADIN' 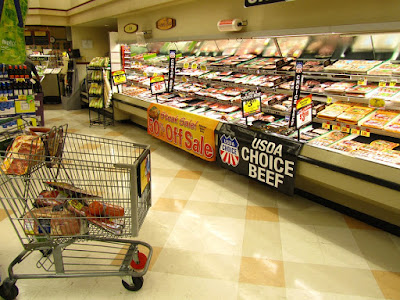 Is your larder bare? Well, you may need to do what I have to do today. Go TRADIN'.

If you grew up in Harlan County, like I did, you probably shopped at the A&P most Saturdays.

A favorite childhood memory, though, is getting to go to Pennington Gap, Virginia, with my granny and my step-pappaw to Cas Walker's. It was an all-day trip across the mountains and through those winding roads. What an adventure to ride in the back seat of their red Oldsmobile before seatbelts were invented. I slid across those vinyl seats every time we rounded one of the many curves. It was like the rides at the Tennessee State Fair every TRADIN' day.

If we only needed a few items to tide us over, we'd walk up the road to Joe and Anna Martha's little roadside grocery store. It ended up being my job to do the trip to do a quick bit of TRADIN'. I didn't mind when the weather was good. Besides, I usually got a treat for my effort. My favorite treat was a Brown Cow. Remember those?

Joe and Anna Martha were like friends to our family. I roamed the aisles of the store to see all the goodies available and chose the ones on Mom's list. They didn't have any buggies. I had to carry each item to the massive counter in the front and stack them together in one spot -- in case another shopper needed space for their TRADIN', too.

After I collected everything on the list, which might include a Squirt pop for Mom from the old Coca Cola cooler at the front, Anna Martha added up the tab and recorded it in her little book. Daddy paid her next time he got his paycheck.

Today, most of those general stores are gone. Actually, our A&P and Cas Walker's are gone, too. But, there's always an alternative in the mountains. These days, if you need to do a little TRADIN' in a hurry, you can pick up a few things at your local gas station. You can even get dinner or supper there, too.

When I did research for my novel (coming out in November), I spent some time in Lynch, Kentucky. There weren't many options for TRADIN' there, but I did discover Miner's Market gas, TRADIN', and cafe. Home-cooked food served. They only had a couple of tables inside, but the food was great.

I loved TRADIN' day. It meant I had lots of options for food and Mom cooked better meals. I never enjoyed regular breakfast foods, like cereal. Instead, I got up before school and fixed a bowl of Campbell's Chicken Noodle soup or a fried baloney sandwich. I miss those days.

In elementary school, I took my lunch in a tin lunchbox with a thermos. My thermos usually had chicken noodle soup. I also packed a peanut butter and banana sandwich. It wouldn't ruin on those hot days in my classroom. We didn't have any air conditioning at our school. I did love the fragrance of a warmed peanut butter and banana sandwich on Bunny bread. Ah ... takes me back.

Did you go TRADIN' when you were a kid? Where did you shop? Do you have fond memories of those trips to the A&P or Cas Walker's?

I'd love to hear your stories about going TRADIN'.

Appalachian Word of the Week -- CHIMLEE 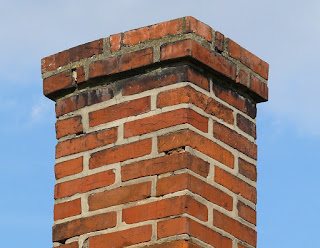 Spring is showing itself in short bursts. Of course, we mustn't forget about our periods of winter that stick with us a bit longer. Here in Atlanta, we just had Dogwood Winter. I expect it will hit my Kentucky hometown in about two weeks.

Until all our winters are complete, we'll still need a bit of warmth in the house, especially at night.

One of the best ways to warm up our houses on a chilly day or night is to light a fire in the fireplace. I love being outside and seeing the smoke rise from the CHIMLEEs and breathe in the woodsmoke.

Yep, where I grew up, most of the folks referred to a chimney as a CHIMLEE.

At Christmas, Santa came down the CHIMLEE to deliver toys.

I panicked the year I realized Santa wouldn't be able to come down our CHIMLEE because it was connected to our stove. He would end up in the fire or stuck in the stovepipe. I bawled. Mom tried to explain that Santa knew not to come down our CHIMLEE, but to enter through the door. What a relief to know we wouldn't be responsible for the demise of Santa--and all those gifts he would be bringing to put under my tree.

Of course, I made sure the front door was unlocked on Christmas Eve before I jumped into bed.

After a winter of coal fires, the CHIMLEE was full of coal dust and ash. When spring finally gave way to summer temperatures, Mom's job was to clean out the stove pipe and the CHIMLEE. We didn't have a CHIMLEE sweep to do it for us. It was Mom's job.

I thought it was hilarious to watch her. There was a lot of stuff in that CHIMLEE. It would pour out and cover her up with black dust, poofing all around her and making her look like a coal miner straight from a day at the mines. What a mess!

Good thing she had a vacuum cleaner to suck most of the gunk out of the CHIMLEE and off the floor, stove, window ledges, and anything nearby. It still took elbow grease to get that black smudge off of everything.

Sure glad I don't have to do that.

CHIMLEEs aren't all the same. Ours was brick. I've seen others that were stone, covered in stucco, or even aluminum siding. Our house had only one CHIMLEE. Some houses have more. Those huge manor homes they show on British TV have too many CHIMLEEs to count. The thing is--the number of CHIMLEEs in your house determines how warm the other rooms in the house will be.

My bedroom was the furthest room from the CHIMLEE. That's why I had a heap of blankets and quilts on my bed. It was almost like sleeping outside on the porch. At least it was dry and the wind didn't howl through the walls.

Did your family call it a CHIMLEE? Do you? Do you remember having to clean out the CHIMLEE each spring?