Appalachian Word of the Week -- MILLER 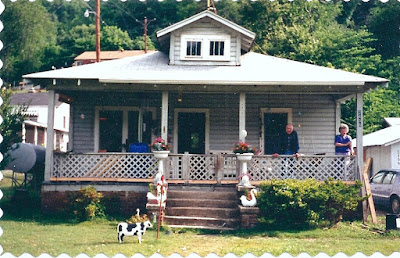 Ah, the front porch. A wonderful place to wile away the cares of the world. Whether you sway in the swing, recline in the glider, or in a rocker, the front porch is an important part of Appalachian life. You may even find a discarded davenport (couch/sofa) on the porch to provide extra seating for family or friends who drop by for a spell.

But when twilight descends upon the mountains, drawing the lightning bugs and sundry other flying critters out of their hiding places, the front porch experience changes.

As soon as you flip the switch or pull the string to activate the porch light, every flying bug in the mountains comes buzzing to join you on the porch.

One of the least creepy fliers is the MILLER.


They are drawn to the light like a moth to a flame. Well, it could be because that's exactly what a MILLER is -- a moth. Even though the term MILLER means moths in general, we used the term for the small moths that fluttered relentlessly around the lightbulb.

At least they don't bite like gnats and mosquitos. They are merely annoying as they flutter past your face on their way. If you swat one, you end up with a swipe of pale-colored powder on your clothing or skin from their wings.

The lightbulb tends to acquire a dusting of their powdery wings, too, as they smash into it. I never understood why a MILLER insisted upon crashing into the light. Just what was it that attracted them so?

As an introvert, I've often compared myself to the front porch light.

As soon as I feel comfortable (in the dark) and walk into a room full of people (turn on my light), it seems that every extrovert in the room flies to me, fluttering around me and smashing into me.
Apparently, they consider my quiet, calm attitude toward life to be a failing and believe their lot in life is to re-create me into an extrovert just like them. I desperately attempt to turn off my light and retreat from their attention.

In reality, all they do is wear me out and leave a powdery residue on me. A residue that makes me less eager to turn on my light again.

And then there are the crazies. Those are the MILLERS on steroids. They're the ones who refuse to leave you alone and desire to control your life. Scary. 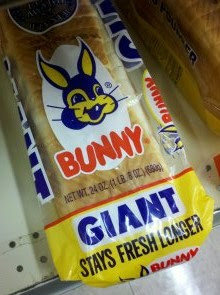 I can smell it now. Warm LIGHT BREAD, fresh out of the oven. Nothing like it.

Growing up in southeastern Kentucky, we didn't have any of those fancy kinds of bread you can get from the bakery or grocery store now. We only had LIGHT BREAD. Most people refer to it as white bread, but we called it LIGHT BREAD.

The LIGHT BREAD of choice in our family was Bunny Bread.

The Bible says we can't live by bread alone, so we found all kinds of things to put on our LIGHT BREAD.

For breakfast, I loved eating cinnamon toast. It was made by putting chunks of butter in the corners and one in the center, sprinkling sugar on the entire slice, and then topping it with cinnamon. Mom put the slices on a baking sheet and stuck it in the oven until the butter melted and the edges turned golden brown. Yum. Sometimes, she substituted brown sugar for the white sugar. The brown sugar became crunchy as it melted on the toast. Either way, it was a great way to start my day.

LIGHT BREAD played a major role in my lunch menu for the first several years of my school life. I either packed a fried baloney sandwich with mustard or a peanut butter and banana sandwich into my little brown poke or metal lunch box. During the warmer months, without any air conditioning in the school, my sandwich warmed up as it waited in the back of the room. When I opened the lid, the aroma of warmed banana and peanut butter, wrapped in LIGHT BREAD, overwhelmed my senses. I breathed it in long and hard before I devoured it.

Nothing topped our visits to the bakery, though. We were blessed to have a bread factory near our house. Sometimes, on Dad's day off, he gathered us all into the car and took us to the bakery in Baxter, Kentucky. Daddy took me inside with him while Mom sat in the car, holding a stick of butter.

We watched the bread make its way from the oven, down a conveyer belt, to where we waited. A worker dressed in white grabbed a loaf of still-unsliced and piping hot bread as it passed and slipped it into a paper poke. Daddy paid his twenty-five cents and handed the hot LIGHT BREAD to me.

Back in the car, Mom ripped the bread open and put the butter inside. As it melted, she tore off chunks and passed them around. We sat there in the parking lot and devoured the entire loaf. Ah! Nothing like it.

LIGHT BREAD filled many roles in our diet. Daddy mixed up honey and butter and slathered it on his LIGHT BREAD. He also used it to dunk in his glass of buttermilk. Toasted was preferred for homemade apple butter and jams and jellies.

In summer, we made 'mater sammiches (tomato sandwiches) with mayo. Meat was not necessary. When we had hot dogs, though, LIGHT BREAD became our bun.

Hot out of the oven, out of the bag, or toasted, LIGHT BREAD served as a staple for our diet. Too bad we are encouraged to avoid bread these days. Especially LIGHT BREAD. Sad, too, that we should now miss out on the pleasure and joy from having it in our daily lives.

Did you call it LIGHT BREAD? Do you still choose LIGHT BREAD over the "healthier" varieties available today? Do you eat bread at all?

Appalachian Word of the Week -- CUSSIN' 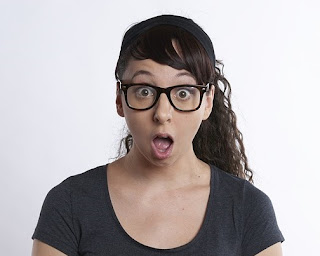 I never heard much CUSSIN' when I was growing up. I don't recall my father ever uttering a single inappropriate word in my presence. My mother, on the other hand, had one favorite word she used when she had taken all she could take. It was similar to my grandmother's only CUSSIN' word. Well, to be honest, Granny's word wasn't really a word. It was a sound.

I found it amusing when a writer friend, who grew up on the other side of the mountain from Harlan in Kingsport, Tennessee, commented recently about the exact same CUSSIN' word her grandmother used. It started with a drawn-out "Shhhhhhhh" and ended with a garbled spitting sound. Both our grandmothers claimed it wasn't CUSSIN' because it wasn't a real word.

My mom's word was definitely CUSSIN'.

CUSSIN' wasn't allowed in my house by us kids. I found out one day what would happen if one of us got caught CUSSIN'. My brother accidentally let out a CUSSIN' word in Mom's presence. She marched him to the bathroom, turned on the sink, and washed his mouth out with soap.

I hid my laughter. What a hoot! It enthralled me so much that I tasted some soap later. Believe me, it deterred me from ever CUSSIN'. Not that I had ever heard a CUSSIN' word -- except for Mom's word.

In grade school, CUSSIN' was frowned upon in school, too. Anyone caught dirtying the air with an illegal word had to face the wrath of Roscoe, the principal's paddle.

In order to avoid Roscoe and the shame of getting paddled or switched again when we got home, some of my friends and I decided to come up with our own CUSSIN' words. We drew them from ordinary everyday items or activities. One of our favorites was, "Well, peanut butter and jelly!" Others included dirty dog, broken pencil, fiddlesticks, thunder and lightning, and gravy and biscuits.

There were a few CUSSIN' words we borrowed from others. Sam Hill and dadgummit were a couple of our favorites. We generally got our borrowed words from older brothers and sisters. If they had used them in the company of adults and didn't get paddled, switched, or soaped, then they were safe for us to use.

In today's world, CUSSIN' seems to be a normal way of life to most folks. They don't bother with the mild words, they go right for the ones that would have curled people's hair in my day.

I've often wondered why people use filthy and blasphemous language when there are words that would describe their intent without offending others. Is it because they want to shock others with their language? Could it be because they desire to attack someone with words when they don't dare instigate a physical attack? Or could it be that they have become so accustomed to profane language (which means unholy) they don't consider it anything but "normal."

Whatever the reason for CUSSIN', I suggest we choose to make a few changes in our lives. Instead of splashing vile language willy-nilly at people, why don't we attempt to use words of affirmation, affection, and encouragement instead?

The world is hateful enough without adding to it. Let's share some positive words instead.

What are your favorite positive words? The ones you receive and the ones you use?

I'd love to hear your stories -- minus the CUSSIN'.