Appalachian Word of the Week -- TAR 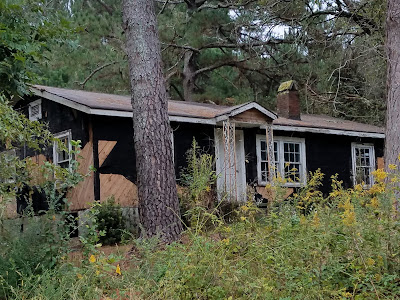 Remember that smell of hot TAR being heated up in a cauldron like a witch's brew?

A group of men would show up with the vat of TAR and hook it up to a generator that could be heard for miles--or so it seemed. It did its magic and heated the tar until it became a hot thick soup of stinking TAR. When it reached the right temperature and consistency, the men would heft buckets of melted TAR to the roof of a building and spread it with a brush broom to hopefully plug up any holes that had previously allowed the rain or snow to seep inside and damage the inside of the building.

I always felt sorry for the poor men who had to climb up on the roof on hot summer days, wearing overalls so the tar didn't burn their skin or leave a coating of TAR on them until it wore off. Can you imagine how hot they must have been?

The smell of hot TAR reminded me of a squashed skunk on the road. Not a pleasant odor at all.

They used TAR for more than just the roofs of buildings, though. It also aids in plugging cracks and holes in the paved roads. TAR is, after all, asphalt. I remember well the zig-zag lines of shiny black TAR streaking along the road like a slug trail.

Another use for TAR has thankfully become a part of history -- an unsavory part of history. I read about people being TARRED and feathered. It's a shame that some people think they have the right to become judge, jury, and executioner (or humiliator) when someone doesn't meet their expectations or abide by their rules for polite society. Polite society -- yeah, that's ironic.

TAR is not only utilized in its hot, semi-liquid state. Many an Appalachian family found a use for another version of TAR. TAR paper.

TAR paper comes in rolls and is still used today to apply a protective layer to a roof before adding shingles. Well, the resourceful mountain folk figured if it was good for providing a waterproof layer between the roof and shingles, it could do the same for the walls of a structure.

Some people used this inexpensive alternative to paint on the outside walls of their houses, garages, sheds, and other outbuildings. I found rolls of TAR paper at Home Depot the other day. A roll today costs about $15.

I usually don't see TAR paper being used on houses in Atlanta. However, I happened upon a house on one of my excursions the other day that was sporting TAR paper on its walls. Unfortunately, the TAR paper is beginning to peel off and the house is in need of a new roll or two.

Does TAR bring back any memories for you? Can you still smell it when you close your eyes?

Email ThisBlogThis!Share to TwitterShare to FacebookShare to Pinterest
Labels: Above the Fog, Appalachian Word of the Week, Diamonds in My Coal Bucket, Karen Lynn Nolan, tar

Get new posts as an Email