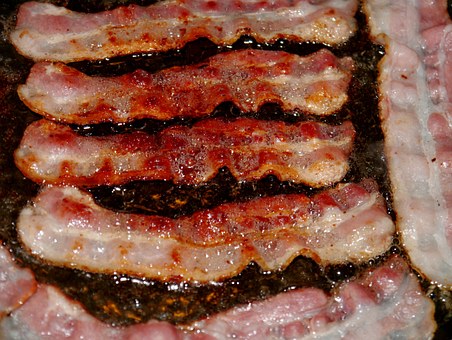 We had very little in the way of spices in our mountain home. Salt and pepper comprised the entire list for daily additives for our food.

In an effort to add a bit of pizzazz to the flavor of foods, we sometimes added onion or butter. However, to make food more than merely palatable, we added a secret ingredient that I doubt even Colonel Sanders added to his secret recipe -- BACON GREASE.

Pigs were common in the mountains. They took up less space than cattle and didn't have to forage for food. I remember several pig farmers visiting the school cafeteria after lunch to get all the food dumped into the trash cans. Slop.

At least some creature on earth wanted to eat it. I rarely ate the lunches at school. Saying I was a picky eater is an understatement.

Thankfully, the pig farmers fed all the slop to the pigs, who grew up to become my favorite food -- BACON. And the bacon added its glorious seasoning to some less-than-favorite foods to make them tolerable.

Almost every mother used BACON GREASE. We didn't have to cook bacon for each meal. Instead, the BACON GREASE from breakfast -- or whenever -- was poured into a container for use later.

Some families had enough money to purchase a fancy BACON GREASE container. Yes, there is such a thing even today. In my house, we used an old discarded coffee can to hold the BACON GREASE. It sat on the stove always, easily available for the next meal.

As Mom cooked her potatoes or green beans, she'd dip into the coffee can of BACON GREASE and add some to the food. If you've never tried it, you don't know what you're missing.

Of course, some foods don't lend themselves to BACON GREASE. I know, a shock. Sweets and bread required lard, Crisco, or butter instead.

Today's BACON GREASE containers include a strainer to remove any crumbles and bits of meat.

Did your Mom and Grandma use BACON GREASE in their cooking? Do you use it in your cooking still today? What's the best thing you've eaten with BACON GREASE as the seasoning?